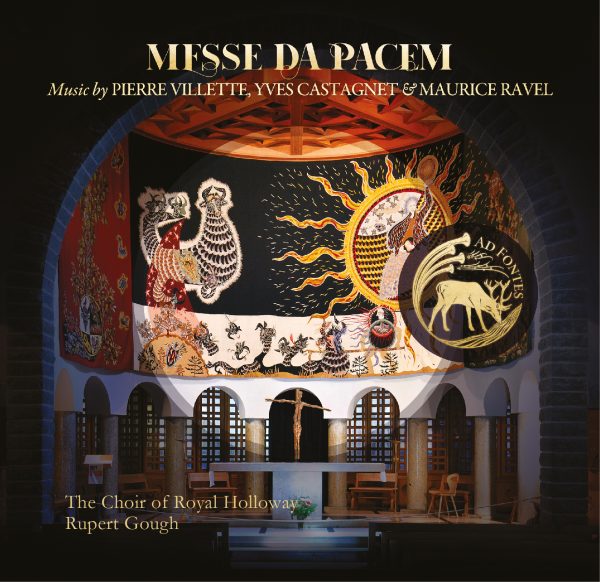 The Choir of Royal Holloway presents the debut recording of Pierre Villette’s Messe Da Pacem in a new arrangement for choir and organ by Rupert Gough. Alongside the Mass is Villette’s well-known Hymne à la Vierge, and works by contemporary Parisian composer Yves Castagnet recorded here for the first time. The album opens with a new choral arrangement of Ravel’s ever-popular Pavane pour une infante défunte. The Choir is joined by alumna, and award-winning soprano, Sarah Fox, and accompanied on the newly restored Cavaillé-Coll organ of Notre-Dame d’Auteuil in Paris.

★★★★★  ‘Think the soundworld of Debussy and Duruflé, occasionally inflected by jazz-derived harmonies and some churchy counterpoint, and you have Villette’s appealing musical style. …this disc offers an intriguing and revealing listen. The whole programme showcases the choir’s near-ideal blend and fresh, open tone, supported by sensitive organ accompaniment.’ (Choir & Organ)

‘The performances are simply superb… This is a distinguished release in every respect and lovers of French choral music should hasten to hear it.’ (MusicWeb International)

‘Ad Fontes, the recently established Buckfast Abbey-based recording label have done themselves proud with their fourth disc. It enjoys striking clarity… and includes a lavish booklet, complete with organ specifications, comprehensive notes and Latin texts. Once again, the Royal Holloway Choir is on superb form, responding to this glorious music with fresh, well-balanced voices, and overall makes this one of the most rewarding discs I’ve reviewed all year.’ (Opera Today)

★★★★  ‘This disc presents a fine collection of similarly composed French liturgical music, well performed by the young singers from Royal Holloway College… The singing and organ playing is excellent throughout.’ (Organists’ Review)

‘Rupert Gough’s organ reduction is really effective in this performance from the Choir of Royal Holloway. Gough conducting, with the recording made in Notre-Dame d’Auteuil in the Paris suburbs with its very fine Cavaillé-Coll organ; just the right colours for Villette’s massive piece. A really well balanced recording as well; the placing of that distant echo choir.’ (BBC Radio 3 Record Review)

‘I would like to add an extra star for this superb CD that transports us to the musical delights of 20th-century Paris… Villette provides the centrepiece, with his Messe Da Pacem arranged for organ from the original scoring of orchestra and two organs by Rupert Gough… It’s worth trawling YouTube for background about this excellent project, which has beaucoup d’elan et aussi tendresse.’ (RSCM Church Music Quarterly)

‘If you are looking for a good recording of the Hymne á la Vierge you won’t get better than the recording here… So, while the first reason for welcoming this new recording is because of the rare repertoire, the second reason is because of the very fine performances which perfectly convey the essence of the music.’ (Cathedral Music Magazine)